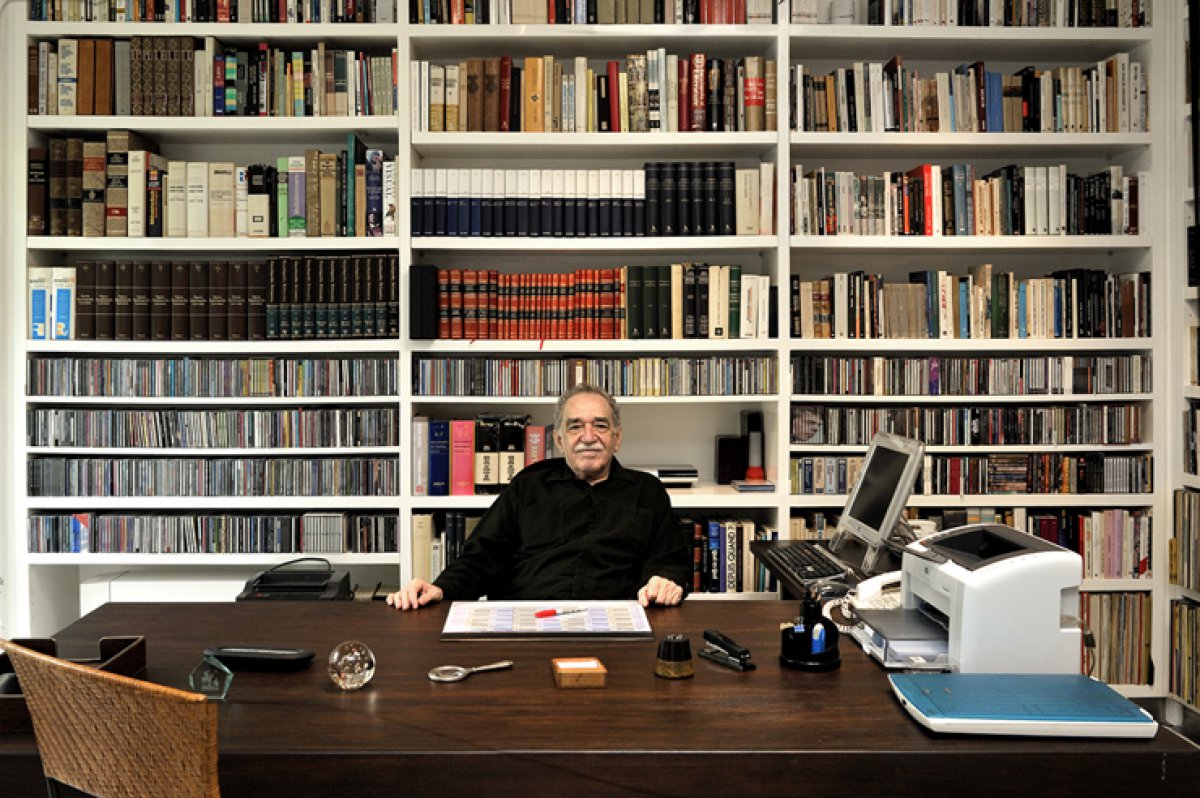 Dimitris Yeros is a justly celebrated photographer and artist based in Athens. Edward Lucie-Smith is a highly-regarded poet and the author of authoritative art histories. And Gabriel García Márquez was – Gabriel García Márquez, “the greatest Colombian who ever lived” according to that country’s president, and often seen by the literary world as being “the voice of a continent”. This is a promising combination of talents, and this album does not disappoint.

present not just outer reality, but the operation of some kind of inner realm, linked to reality but somehow transcending it.

We see the eminent author in late life (except for a photo of a photo of him as a child), in a variety of moods and settings, in close-up and middle distance, in or around his houses in Mexico City and Cartagena, the latter an oddly boxy essay in burnt orange – not the kind of hideaway one might expect for so visionary a writer. His Mexican library is also highly functional – it seems he referred to it as his “office” – spotless and containing reams of reference books, the objects on his desk arranged and spaced with almost painful precision. (For all his vocal anti-Americanism, he had an Apple printer.)

Even his Mexican garden is rationally lawned (if naturistically planted), with almost the sole irruption of unreason an anguished-looking sculpture of St. Francis of Assisi, who bursts from a buttress clutching a book. There are also vistas from Cartagena, of colonial buildings and traditional characters who might just that moment have materialized themselves out of the pages of Love in the Time of Cholera.

The pictures were taken between 2006 and 2010, and Yeros gives closely observed detail about their encounters – how they met, the locations and their furnishings, the writer’s garb, his candour, his humour, his kindness (not least towards slightly awed Greek photographer-artists), his unexpected diffidence, his stiffness in front of aimed camera lenses – also his occasional inscrutability. This at times makes him sound almost menacing. He conducted detailed background checks (which he called “CT scans”) on would-be interlocutors -

’I must tell you [he almost warns Yeros on their first meeting] that I get to know people in advance, who is suitable to be my friend and who is not’, he continued with a hint in his voice that I was unable to explain.

Images of geniuses are interesting even when dashed off by journalists, but Yeros probes more deeply than most. He understands not just technical framing, but also cultural framing, and the tiny flashes of significant beauty that illuminate every day, but which so few of us really look at – the shadows of furniture lying across a cool and ordered room, street musicians in scarlet, the shadows of wrought-iron lanterns, yellow roses in a clear vase, puddled streetlights in Cartagena Bay, Márquez’s gnarled hand holding a pen. He adds occasional apposite and typically counter-intuitive quotations from the author, accompanying just the right picture -

I am a sad and lonely creature. Contrary to appearances, this is typical of the Caribbean psyche.

As Lucie-Smith intimates, there seems to have been a real warmth between writer and photographer, and all kinds of shared understandings. Márquez’s language is famously visual, and he greatly admired Yeros’ paintings, which often feature small and lonely men racing through barren territories, stalked by outsized avifauna. Such motifs were always likely to attract an author interested in solitariness, escapes, and universes being upended. Márquez once observed he found his raw material in the gap between realism and nostalgia – and the same might be said of proud Hellenist Yeros, whose ultra-modern photos echo much older aesthetics. (On this subject of Greekness, I reviewed his earlier collection of images inspired by Cavafy here, including one he re-uses in this book, of the novelist gamely twirling an umbrella to illustrate Cavafy’s “Ithaca”.)

Yeros did not meet Márquez again between 2010 and his death four years afterwards, but even in 2010 Alzheimer’s was apparent – perhaps all the more dreadful when manifested in a man whose world revolved around retentive memory, imaginative élan, and endless subtleties of meaning. The author’s wife was always defensive of his dignity, and no doubt she was right that he would not have wanted to be seen, let alone immortalized, as an invalid, helplessly facing the greatest solitude of all. Yeros, ever the unsatisfied artist as well as considerate friend, regrets not having been able to capture even more aspects of this protean man. But he should not concern himself overmuch, because he has amply succeeded in producing what he hoped – “a tender and durable memento” of a passed past master.

Derek Turner is a novelist and freelance writer