The German flag that was waving in the wind upon the sacred rock of Acropolis since April 1941, was replaced by the Greek one in October 1944, signaling officially the national liberation. During this very year, the twenty-one-year old Yiannis Gaitis, who registered at the Athens School of Fine Arts as a student of Constantinos Parthenis in 1942, held his first personal show at his home, -35 Mavromateon Street- and presented his paintings to a narrow circle of intellectual friends.

The assassination of freedom

Despite the fact that the calamity of the civil war came to complement the trials of Greece after the occupation, Gaitis continued to exhibit every year, from 1944 to 1947 systematically, at the Philological Society of "Parnassos", one of the few exhibition-halls in the tormented and exhausted city of Athens, that was trying, though, energetically to revive in every aspect. To its artistic recovery contributed drastically the cultural support -already since 1947- of the foreign institutes, as they intertained in their precincts, and elsewhere, "imported" exhibitions from America, Great Britain and France, of copies of contemporary works of art, engravings and illustrated books. Moreover, Roger Milliex, the General Secretary of the French Institute, had started immediately after the war to collect works of Picasso, Picabia, Matisse, a.o. which the French Nation would donate to Greece as "a token of love and admiration for the heroic attitude of the Greek people during the war and the resistance of 1940-1944". This collection, initially presented in 1949 at the French Institute of Athens and afterwards in Thessaloniki, made out one of the most important artistic events of post-war Greece(1).

Adjustable and receptive to the international artistic activities -contrary to a conservative group that encountered suspiciously any foreign quest-, thirsty for the contemporary artistic developments(2), Gaitis must have visited those exhibitions, because the morphological change in his work is evident. Already in 1947, he shows a tendency to more geometrical forms in his so far representational and directly recognizable portraits, whereas in the very next year he embarks upon sculpture, cutting up the form in a purely cubistic manner as he follows the traces of Picasso. Till 1954, the year of his exhibition at "Kentrikon" and of his departure for a permanent stay in France, he experiments with an expressionism that carries surrealistic echoes and, mainly, with cubism and geometry, announcing a predisposition to austerity, discipline and organization, fully expressed in his most representative work by the standardized, almost mathematically constructed, universal "homunculus".

Even before graduating from the School of Fine Arts in 1954, Gaitis had demonstrated his intense individuality by his exhibiting activities, as well as by the style of his painting that, being relatively bold, strayed from the usual, outmoded academic tendency. In Paris he was confronted with "art informel", a movement responding to American "abstract expressionism", that had snatched the torch from the French capital and had led New York into the international artistic limelight. An art of non-pictorial shapes which inhabit shallow fields, an art of free and intemperately spontaneous, violent gesture, "art informel", with its love for texture and the qualities of the material, presented another direct challenge for Gaitis since the mid-fifties and up to the end of that decade. Parallel to his purely abstract compositions, however, he continued to embody descriptive elements into certain of his works -mainly in the unites Beasts [1956-1957] and Folliage [1958-1959]- influenced, maybe, by the corresponding expressionistic, North European movement "Cobra" which accepted the spontaneous, automatic approach of "art informel" yet without abolishing the existence of the image.

At the beginning of the following decade, Gaitis moulds with the same gestural, sculpted approach a personal vocabulary of pictorial codes, gradually standardizing and embodying them into the sphere of an imaginary, ecological microcosm. He gives shape to his own extraterrestrial homunculi and interweaves them with mundane ants, frogs, roosters, pigeons, flowers.

During this stage of his work we detect the first traces of pop art's influence. The formalistic repetition, a basic feature of Andy Warhol's art, marks the painting of Gaitis from then on and up to his death; however, the Greek artist does not attempt, at this period, to render the spirit of consumer society and popular mass culture by means of a morphological uniformity, but seeks, instead, to settle on a particular pictorial alphabet, which he recomposes so as to express a different comment each time. In certain paintings of his appears also the cinematographical depiction of two-dimensional space in different zones, as we encounter it in the representation of Roy Lichtenstein's comics(3). Gaitis' main interest is the visual way of relating a narrative as well as its gradual, successive reading and notional decoding. Within the scope of the same research, he turns to the most genuine sources of Greek tradition. The horizontal arrangement of the illustrated tale with its usually cosmic content is replaced in certain paintings by the Byzantine system of rotating narration, by which the perimetric scenes add details of the lives of the Saints, depicted in the center of the icons(4).

It is this anecdotal narration that differentiates Gaitis from pop art's static symbols, frozen in the dimension of time, while it brings him nearer to the ideology of "Nouvelle Figuration" [1960-1979]; besides, in 1964, urged by Gerard Cassiot-Talabot, he co-exhibited with this group -then under the name "Actions et Reflexions"- in Paris, at the Galerie "A"(5).

Gaitis gradually creates a language of communication, easy to understand, that allows him to make active comments on the daily actualities, announcing openly his liberal views. He remodels the primordial forms of his imaginary microcosm into less abstract, more perceptible pictures, directly inspired by real life. About 1967, as the dictatorship of the colonels was set up in Greece, appears for the first time in his paintings the expressionistic human profile with the hat(6), a motif he is going to simplify and geometricalize exceedingly turning it into the trade-mark of his typical work.

At the same period he paints the "Assassination of freedom", in which a series of homunculi, dressed like soldiers, shoot a pigeon. The repeated, expressionistic profiles are transmuted into couriers of a message against the actual political reality, and Gaitis becomes the revolutionary creator (7) who awakens the conscience of every Greek citizen.

A tendency to interfere with the contemporary events marks the artist's work from then on. Already since 1970, the "homunculus" comes sometimes even to "demonstrate" in performances among us, as a living organism, having escaped the restrictive, two-dimensional limits of the painting frame.

Yiannis Gaitis' painting from 1945 to 1967 is unknown to the general public that identifies the artist with his subsequent artistic production. This period represents, though, the crucial brewing time of his formalistic speculations and his multilateral semantic concerns: it is an epoch which proves that Gaitis, with his left-wing ideology, -a real offspring of pre-war and post-war Athens- was incessantly daring to investigate unknown artistic paths, in order to raise dynamically, through art, his reformatory voice against the daily, domestic or not, sociopolitical events. 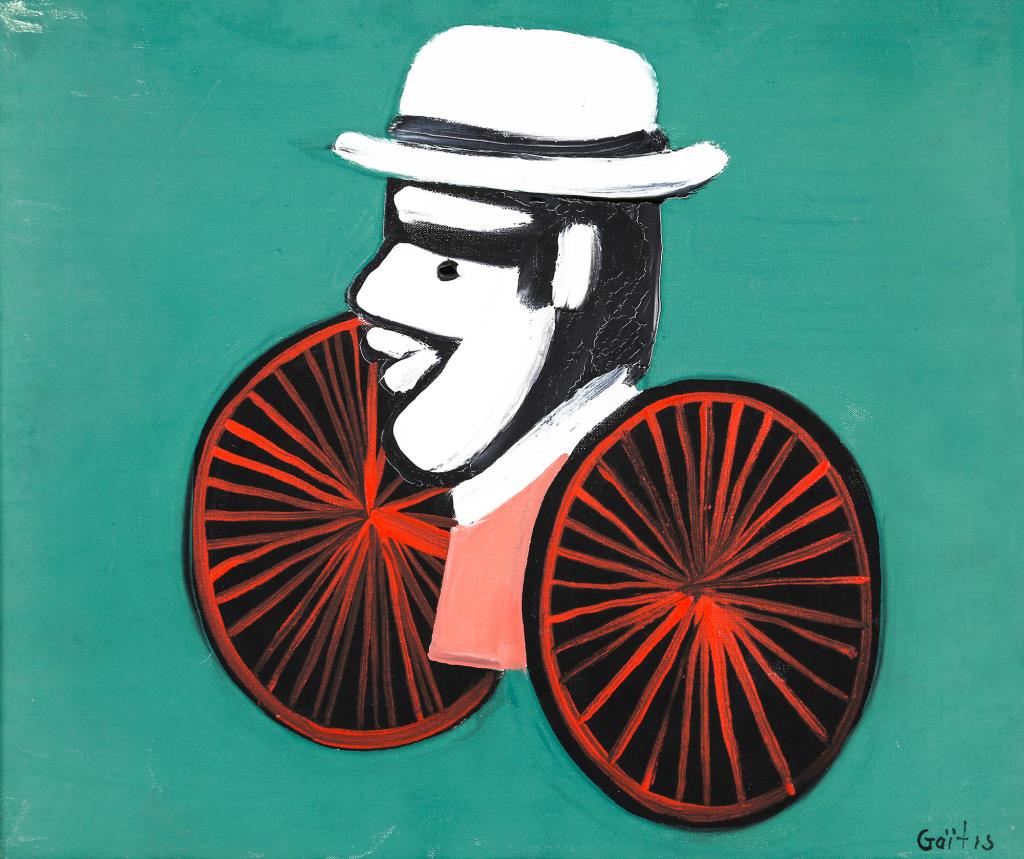 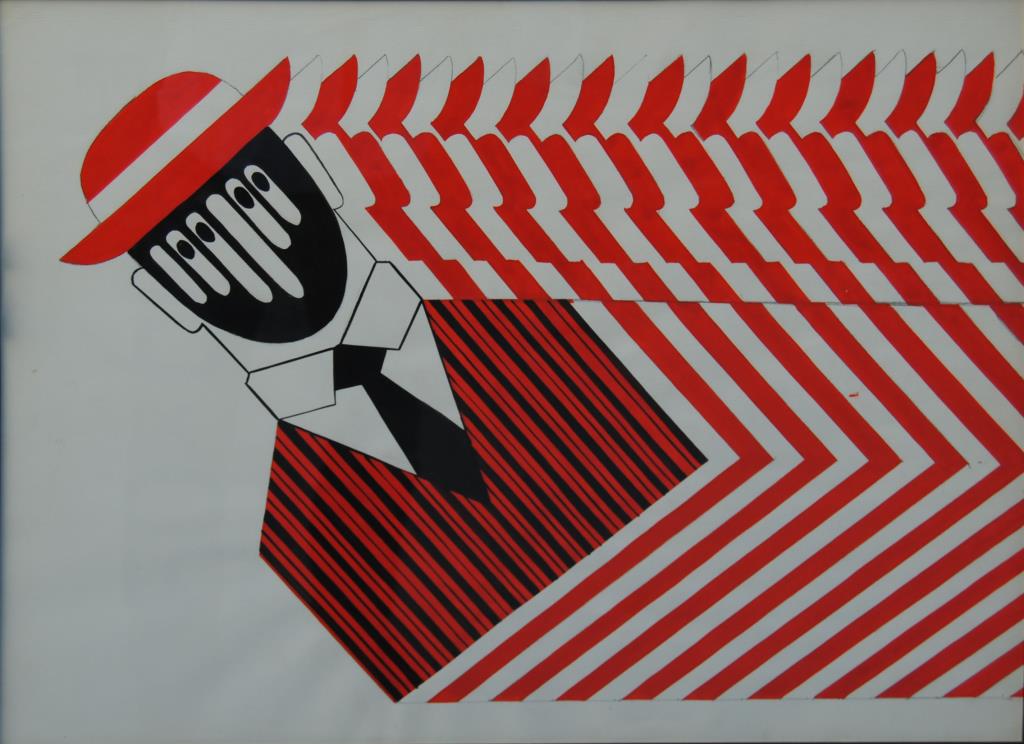