ARMAN (1929 – 2005) was a French-born American artist. Born Armand Fernandez in Nice, France, Arman is one of the most important international object artists and a co-founder and member of the Nouveau Réalisme. He was a painter who moved from using objects for the ink or paint traces they leave ("cachet", "allures d'objet") to using them as the painting itself. He is best known for his "accumulations" and destruction/recomposition of objects.

He studied at the Ecole Nationale des Arts Décoratifs in Nice from 1946 to 1949 and then continued his studies for two years at the Ecole du Louvre in Paris. An acquaintance with Yves Klein led to the idea of organizing joint happenings and events, which the two artists realized in 1953. Armand's neo-dadaist 'Cachets' (stamp prints) of 1955, and later the 'Allures' (prints made with objects dipped into paint) and the 'Coupés' (cut-up objects) followed by the 'Colères' (objects which were smashed and then mounted) were still influenced by Kurt Schwitters. When the last letter of his name was accidentally forgotten on a catalogue cover in 1958, he decided to keep this spelling.

In 1957, Arman became interested in common objects as works of art. First he did what came to be called his "allures d"objet" (object impressions) where he would dip an object into paint and press it on canvas; thereby leaving the object's shadow or impression. Then he figured the object itself was worth paying attention to and he started to "treat" them in his own way. Arman's way of treating objects is very special: his intention is to remove the material function of an object so that as a work of art its only possible function is to "teed the mind" and not serve a material purpose anymore. What better way could he find to achieve that result than by breaking, slicing or even burning objects such as a violin, telephone, typewriter or even a whole car. In addition, he also made objects useless by accumulating them (2,000 wrist watches in a plexiglass box are fun to watch but not very functional unless you like to "pick your time")

The interesting fact is that once emotionally detached from the circumstances associated with a broken violin, one-can grow to appreciate its abstract beauty; and, in a sense, Arman is literally teaching you that things you never thought could be regarded as attractive can indeed turn out to be very aesthetic.

Because of this achievement, Arman has come to full worldwide recognition.

Each year for the past eight years Arman has been featured among the top 15 artists in the list of "Top 100" world-renown artists and some of his prints and posters have been used to promote international music festivals, for example Luxumberg-1978. The artist has had over 30 one-man shows in museums all over the world, many TV interviews, and innumerable articles about his work.

Together with Klein, Tinguely, Raysse and César, Arman is one of the most important artists of the Nouveau Réalisme. Since the 1950s he has been honored with numerous international exhibitions and has presented works twice at the documenta 3 and 6 in Kassel. 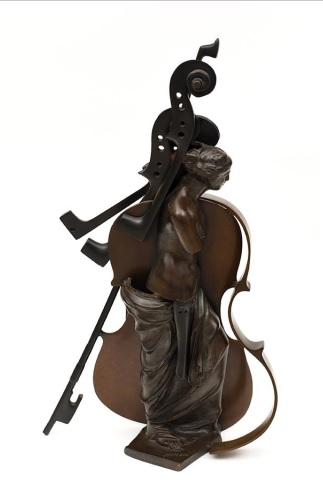